Showing posts from August, 2011
Show all

This cinematic gem is an excerpt from L"Enfer, a film shot in the early sixties by director Henri-Georges Clouzot. The film's subject, Odette (26 year-old Romy Schneider) is the target of her husband's extreme jealousy. Although the film was never finished, it was presented in 2009 as a full-length semi-documentary by Serge Bromberg . Partly shot in in black-and-white, partly in color, the director and cinematographer break from tradition in their filming techniques (hence part of the Nouvelle Vague movement in France). I love the experimental use of chiaroscuro and the ever changing color toward the second half of the clip. UPDATE and NOTE: The musical artist Beyonce uses this clip as a direct source of inspiration for her video 1 +1 .   Romy Schneider dans l'Enfer - Watch more Videos at Vodpod.
Post a Comment
Read more 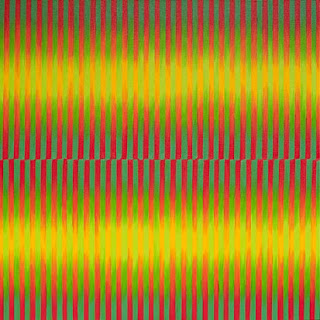 Eva Lake will show paintings August 4 - 27, 2011 at the Augen Gallery (I also exhibit at this location). Her show title is called "Drape", and not only do the color juxtapositions create pure energy, they also occasionally form a dimensional convex appearance. Eugène Chevreul, an important color theorist, would be proud. Image source: augengallery.com
Post a Comment
Read more
More posts